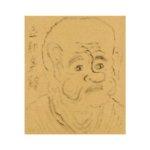 Phu’s 16 portraits of the luohans arguably do more to highlight the commonalities between these two influences than the differences.

Jason Phu’s “the faces of guanxiu’s sixteen friends, the luohans of his feverish dreams“ is more than an exhibition. It is a narrative. In it, we encounter the famous Buddhist monk and painter Guanxiu, and his 16 friends, ‘luohans’, the original followers of Buddha. One night, Guanxiu drinks some sour wine and quickly falls into a vivid fever dream, where he encounters the 16 friends, all offering him a drink from the pond.

Phu is known for his distinct style, in which the contemporary flirts with the traditional. The paintings are facsimiles of Guanxiu’s originals: abstract faces, big brows, large noses, almost grotesque – which was unique at the time, Phu says. Painting and referring to historical events and stories are not unusual for Phu. He believes that what makes stories important is the act of storytelling itself, rather than the accuracy of its content. There is no right or wrong way to tell a story, so long as everyone can take something from it. The same is true of Phu’s art, which is his way of storytelling. “Art doesn’t have to serve a purpose,” he says, “I believe that people enjoy the funny faces.”

But Phu’s nonchalance about his work belies its importance in the context of multicultural Australian society. Growing up as an Australian-born Chinese, Phu incorporates his competing cultural influences into his work. The result is striking and humorous, a bizarre amalgam of the cartoons he watched as a child and Chinese traditions like calligraphy. This is surprising: while he is interested in traditional art, he admits that he can count with one hand the number of times he has seen his calligraphy teacher. Just as well, lest he become constrained by the technical specifications of the ancient art.
​
However, Phu’s 16 portraits of the luohans arguably do more to highlight the commonalities between these two influences than the differences. There is a humour inherent in Chán (Zen) Buddhism, obvious in Guanxiu’s originals, to which Phu refers. Those familiar with Phu’s past work know that his paintings, too, have drunken humour in spades. Disparate traditions of Australian larrikinism and East Asian absurdity thus converge in this exhibition.