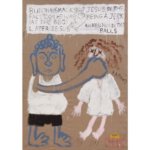 Artwork: On the bbq were a thousand generic meat sausages that the hand of Guan Yin, the Goddess of Mercy, calmly turned. She was unperturbed by the vicious spitting oil. Shaking her warm empty can she yelled out ‘can someone get me a beer?‘ , acrylic on linen, 250x180cm

It was the worst house party I had ever been to. Cai Yan is sitting on the esky in the full sun without sunscreen, refusing anyone a beer. She is muttering to herself over and over, ‘I’ve seen harsher suns than this’. Laozi is passed out under a tree of worm-infested apricots. And some lady from Sichuan was chasing a hermit from the mountains around the house with a bamboo pole. The hermit was giggling uncontrollably, infuriating her even more. No-one could tell me why she was so angry or why he was giggling, only that they were both gatecrashers.​ – Jason Phu, 2018

UNSW Art & Design graduate Jason Phu won the Sulman Prize and received a Freedman Foundation Travelling Scholarship in 2015. He had also been selected as as a finalist in the Archibald and Sulman prizes, two of Australia’s most prestigious art competitions.

Jason’s raw and profane ink works explore his heritage as a Chinese Australian, born to parents who lived through the Cultural Revolution and Vietnam War.