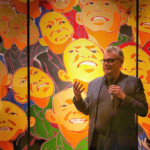 Fang’s work is characteristic of the unique cynical realist movement, whose origins lay in the period following the Tiananmen Square violence of 1989. With the ensuing shock loss of innocence and optimism characteristic of the early years of economic reform and open door policies, Fang and his colleagues began developing a new style which brazenly commented on the emerging social contract between the Party-state and the people. The Party will get out of the detail of people’s daily lives, in return for them accepting unquestioningly the Communist Party’s rule.

Happy pigs became a common theme used for capturing and sardonically commenting on this implicit social contract between Party and the people. Less predictably, Fang Lijun crafted a wildly grinning, idiotic, self-portrait with which he ubiquitously populated his canvasses. His parades of grinning faces were like masks, concealing deeper anxieties which lay behind.

In this latest exhibition at Vermillion Gallery, Fang has developed a technique for making large-format, brilliantly coloured woodblock prints. His self-portrait like shaved head is still there, but gone are the idiotic grins, replaced by expressions of the anxiety, uncertainty, foreboding that had previously been concealed. Is it that the Party-state’s social contract is ending? Or are there existential concerns of environmental apocalypse? Or just that a more mature artist is facing his own personal aging and the uncertainties and fears that brings?

These are powerful works in bold striking colour by a confident established major artist and a must to see.