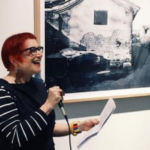 Xu Yong made his hutong photographs almost three decades ago. Today hutong homes, especially intact courtyard houses, are much coveted. At the time, however, it has to said, locals had no romantic illusions about hutong life.

The writer and translator Linda Jaivin gave the opening speech at an exhibition of photographs of hutong 衚衕, the unique (and all-but-disappeared, or destroyed by restoration) alleys of Beijing, by the artist Xu Yong 徐勇 at the Vermilion Gallery in Sydney on the 4th of May 2017. Linda, a long-term collaborator and a frequent contributor to Heritage projects, has kindly given us permission to publish her remarks. Vermilion has provided images of Xu Yong’s haunting work.

As Linda notes on the day she gave her speech, May Fourth — the anniversary of student demonstrations in 1919 — was only a month away from the twenty-eighth anniversary of the crushing of another patriotic student-led uprising in the Chinese capital in 1989. To continue our commemoration of that event (see The Gate of Darkness), we reproduce below an essay by Zhang Langlang about one particular hutong next to Tiananmen Square, and the fate it suffered.

The hutong of Old Peking and the life they nurtured have been under threat and in decline for over a century. With the end of the imperial era and the collapse of the economy, social order and civilisation of Manchu-dominated Beijing, the vicissitudes of modern Chinese history have constantly buffeted the fabric of hutong life. In the 1940s, the influx of refugees and further economic deprivation created tenement hutong 大雜院. With the arrival of the Communists and their vision for a socialist city, a mass resettlement of non-Beijing workers led to further crowding and the displacement of the original residents, or at least their sidelining. Following more than a decade of urban stagnation, from the late 1970s official policy was to destroy all but a few ‘model hutong‘ and the rehousing of the dislodged inhabitants in high-rise buildings. Then came the tide of commercialisation in the 1990s and with it developers, speculators and phoney heritage conservation. All the while Beijing has been ruled over by outsiders who, at best, encourage the mummification of Old Peking culture for the sake of their own aggrandisement and profit.

Linda Jaivin is herself familiar with the remains of Beijing hutong life: when she visits and works in the city, which is frequently, she lives in a courtyard house near Zhonggu Lou 鐘鼓樓. The old city’s hutong were a feature of work in China Heritage Quarterly. In China Heritage we will return to this topic in the future.

The Hutong Photographs of Xu Yong

I’m delighted to have been asked to open this exhibition of Xu Yong’s photographs of Beijing hutong, the narrow, grey-walled alleys and lanes that are as much a part of the historical identity of China’s capital as the imperial palaces, temples and parks.

I’m going to speak to you about the history and character of the hutong, and tell you some stories about the people who have lived in the ones photographed here. But before we talk about these 700 year old alleyways, I want to acknowledge that we are standing on a land that has 60,000 years of history and culture — Aboriginal land. I wish to pay my respects to the Gadigal people of the Eora Nation and to their elders past and present.

The hutong are the connective tissue of the unique organism that is the traditional Beijing lifestyle, a mix of the ceremonial and the familial, the public and the private, the hidden and the communal.

On the one hand, the long grey walls of hutong hide people’s homes from view. On the other, they are a space where neighbours meet, children play, and gossip travels. There is a unique Beijing slang for bearer of news and gossip: hutong chuanzi 胡同串子. Chuanzi is the up-tempo percussion that accompanies an actor in Peking Opera who is racing around the stage in circles — a stylized action representing great distance.

Speaking of walking in circles, everyone who knows Beijing has had the disorienting experience of searching for a place you once knew well that has suddenly disappeared. The wrecking ball of greed and corruption and official indifference or collusion has collapsed countless hutong walls and homes into rubble. So many places, quirky, unique, are now simply the landing sites of anonymous towers of glass and steel.

Xu Yong made his hutong photographs almost three decades ago. Today hutong homes, especially intact courtyard houses, are much coveted. At the time, however, it has to said, locals had no romantic illusions about hutong life.

Homes once intended for a single extended family now housed many. Heating came from coalbrick-fired stoves. Electricity and water supplies were a bit of a crapshoot. Kitchens were makeshift lean-tos in the courtyard and the toilets were outside, public and foul. (They still are.)

But Xu Yong was from Shanghai and the hutong fascinated him; he saw beauty where residents saw slums.

Hutong first came into being in the thirteenth century as part of Khubilai Khan’s Khanbaliq. Cities had existed on this patch of China’s northern plains for more than two thousand years by the time Khubilai Khan’s urban planners laid out the chessboard grid of the city with its nine straight north-south and east-west avenues wide enough for nine chariots to travel side by side; minor streets half as wide, and finally, the hutong, twenty-nine in all. (Later, as Beijing grew, the hutong grew in number to over 1,200.)

From the thirteenth century to the present day, Beijing has been home to countless military and civilian officials — making it a bit like Canberra, I suppose.

In the Yuan, Ming and Qing there were strict rules about who could live where. Strict regulations prescribed the size of your home and even the exact depth of your doorway. You could tell, for example, if a highly ranked military official lived there: the entryway would be deep and there’d be stone wardrums on either side of the door. Today, you look for the grand entryways, of course, but also the CCTV cameras and the luxury cars with military license plates.

But a hutong is not a gated community, and anyone can enjoy its pleasures: Wild grasses grow from even the grandest of the sweeping ceramic tile roofs and spring breezes can share peach blossom petals from hidden gardens with the street.

Peddlers and itinerant craftsmen still work the hutong, although they are neither as numerous or as colourful as in the past. You hear them singing out their wares: quilts for winter, potted plants for spring, cold sour plum soup for summer and the fat grapes called tizi in autumn. They collect your old bottles and your old microwaves. Almanac peddlers once bounced piles of string-bound books on the ends of shoulder poles, today vendors of the Beijing Daily stack tabloids in the baskets of their bicycles, advertising them with a recorded squawk: 北京日報! 北京日報!

The names of hutong often tell you something of their history. Take Zhanzi Hutong 氈子衚衕, for example. A zhanzi is a felt rug. This hutong was once home to workshops that produced rugs and blankets to help insulate the palace and keep the emperor and his entourage warm in the harsh Beijing winter.

Nearby is Qianjing Hutong 前井衚衕, or ‘Front Well’ Alley, where an eighteenth-century Manchu general lived. He served the Qianlong Emperor well, and Qianlong married his ninth daughter to the general’s son. Their home on Qianjing Hutong became a 公主府, the official residence of a princess. By the Republican period, their descendants were still living there, but the family fortune was in decline and the home was divided and in disrepair. It was completely destroyed in the Cultural Revolution, and replaced with another building though I believe you can still find a small part of the old family temple there if you look hard enough.

Number 23 北溝沿衚衕 — North Ditch Hutong, meanwhile was for a time the home of Liang Qichao 梁啟超, a radical thinker who in 1898 was part of a group who persuaded the Guangxu Emperor to adopt a program of reform aimed at turning the Qing into a constitutional monarchy with modern government and education. One hundred days later, Guangxu’s powerful aunt put the emperor under house arrest, where he remained for the rest of his life. Liang escaped to Japan. Other reformers were executed on the site of what is now a Walmart, incidentally. Another One Hundred Days Reform Fun Fact: Liang visited Australia at the time of Federation, met Sir Edmund Barton and thought the Australian model of federation might work for China.

His son, Liang Sicheng 梁思成, became an architect devoted to the documentation and preservation of Old Peking. He advised the Communists to build their monumental buildings away from the Forbidden City, to leave the historic hutong neighbourhoods there intact. They didn’t. The memory of those neighbourhoods lies crushed beneath such structures as the Great Hall of the People. Distressed, persecuted and now dead, Liang Sicheng is one of the great heroes to China’s contemporary urban conservationists.

The last hutong I’ll talk about tonight is 豐盛衚衕. Fengsheng means ‘sumptuous’ or rich and is either a reference to the name of a Ming general or the wet nurse of a Ming emperor, no one knows for sure. Fengsheng Hutong is today best known as the home of one of twentieth-century China’s greatest and most beloved writers, Lao She 老舍, the author of such classics as Rickshaw Boy 駱駝祥子and Tea House 茶館. On 23 June 1966, Red Guards beat and abused Lao She, then sixty-seven years old, for hours alongside other Beijing artists and intellectuals. The following day his body was found in Taiping Lake (which like many hutong, no longer exists). You can visit his old home. The calendar on the desk remains open to the date of his death: 24 August 1966.

Behind each of these quiet photographs is a tumult of history. Not all of the stories can be openly discussed in China itself. Consider the period when Xu Yong documented these hutong: from June 1989 to the northern spring of 1990, in other words, right after the massacre of hundreds and perhaps thousands of unarmed protesters by the People’s Liberation Army under orders from Deng Xiaoping and Li Peng. [See also Xu’s book Negatives 底片, a collection of his work on the 1989 protests. — Ed.]

In one month from today, on the 4th of June, it will be the twenty-eighth anniversary of the Beijing Massacre. Joy and life but also pain and sorrow run through these narrow lanes. The bulldozers can knock down walls and homes and the hutong themselves, and they do, but I like to believe, anyway, that nothing can destroy the spirit of the city that lives within them, a spirit captured wonderfully in the haunting works here.

Author’s Note: I would like to thank the editor of China Heritage for his suggestions and revisions to this text.