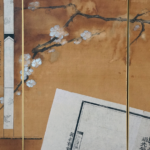 Wang Lifeng’s preoccupation with reinterpreting history through his own subjective lens, exudes into his art practice as he creates a dialogue between himself and the viewer; and the past and present.

Wang Lifeng’s exhibition Archives of Longing transcends time by reflecting on different periods from traditional Chinese art and history, inviting viewers to reinterpret the past and perhaps rethink the present. Wang’s mixed media artworks delicately employ classical Chinese techniques such as calligraphy, woodblock print and traditional Chinese ink painting as a vehicle to imagine, or reimagine life throughout China’s dynastic cycle. While the artist takes viewers back in time through his adoption traditional techniques, stories and pictorial accounts of Chinese history, he still embodies contemporary aesthetics through his skilful employment of mixed media evident in his meticulously detailed illustrations and intricate brush work. Wang’s seemingly haphazard montage of text, figures, landscape and architecture creates the impression that the artist is attempting to seek the truth by piecing together a puzzle from the past.

Interestingly, Wang worked as a stage and set designer for the Beijing Peoples’ Theatre of the Arts for almost a decade before he became a full-time artist for over three decades. The artist’s theatrical design experience exudes into his art practice as his works are reminiscent of the scenic backdrops made for a theatre. Divided by a thin gold leaf outline, each artwork is separated into three or four horizontal panels echoing, not only resembles the layers of scenery on a stage, but also pays homage to traditional Chinese decorative screens, as the artist depicts romantic picturesque landscapes and dramatic mountain ranges.

While each artwork tells its own story, Wang creates the illusion that they are essentially connected, as he deliberately paints outside of the composition, allowing the works to bleed into one another as if they are telling a long continuous narrative. A subtle tension is at work here, as the thin black bordered lines that frame and contain the artworks are evocative of margins characteristic of traditional Chinese books and also circumscribe the title of the exhibition, Archives of Longing.

Reading the works perhaps parallels the introspective experience of unfurling an ancient Chinese handscroll as one pensively ponders each unique piece. It is almost impossible to maintain a distance from Wang’s artworks, as he transports his viewers back in time through his visceral and painterly techniques, seducing viewers to pause and meditate over the elaborate woodblock prints and illustrations.

Wang Lifeng’s process of treating the paper in tea casts an earthy wash over many of the artworks conveying the feeling that they have aged over time. This technique, however is not necessarily a new practice in Chinese art and culture, as the relationship between tea and paper has been present for many centuries. While it is a traditional art form, Wang developed his own secret practice. He says it was a long and arduous process, involving much experimentation to achieve the desired tea colour effect. The use of gold leaf also contributes to the illusion of age as it creates the verisimilitude that there is a deeper layer, only revealed to us by a process of weathering or damage over time. Archives of Longing also explores a deeply sensual and passionate side to history painting as the artist draws on erotic art from the Ming Dynasty through his subtle portrayal of pleasures between couples in their private boudoirs.

Wang Lifeng’s preoccupation with reinterpreting history through his own subjective lens, exudes into his art practice as he creates a dialogue between himself and the viewer; and the past and present. This is evident in the harmonious montage of contemporary and traditional layers to his artworks. The layers can be read metaphorically to represent the fusion and continuity between past and present.