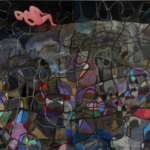 “Han Qin depicts her inner world as an intimate space of dreams and psychoanalysis. I love the way she blends natural elements with the human, just as the Dutch grotesque painter Hieronymus Bosch, the body is transformed into trees, vegetation, clouds…a kind of ‘big man’ modernity in this age when mankind must reconcile with the earth.” – Artist Ange Leccia

The most moving work in the world is often conceived from the simplest, silliest idea. Examples are all over the place in Han Qin’s works. She spent a whole year collecting daily newspapers, to apologize for the time she neglected; she moved her bed to the Pierre Cardin Art Center in Paris, slept and recorded her dreams at the opening of the exhibition; she draws and collages about islands, coasts, people and everything.

We would discuss what it was like to be in the bag of a kangaroo, the story of helping the hedgehog cross the road, and how to take a piece of the sea away… the chats between us often feel like conversations of five-year-olds. Three years ago when I saw her work for the first time, I entered the rhapsody she constructed immediately. Both life and art begin with fantasy, but such innocence is either castrated by rationality and social norms as we grow up or is fleeting and uncaptured. In the art world full of tight logic and Grand Narratives, Han Qin, who graduated from the prestigious China Academy of Art and the Ecole des Beaux-Arts in Paris, chooses a different path in her artistic practice – aren’t answering to our intricate intuitions and feeling insouciant, just as or even more important than thinking? This is why art generates powerful connections and resonances, in addition to advancing our knowledge.

Collage is Qin’s favourite medium. To her, each cropped image is a little thread of her life. Like stars shining in the dark, all images intertwine and form an “interstellar vault”, and she is the protagonist in the centre of the world. Her drawings and collages bring the audience into a world full of adventures, freedom and poetry. During a psychic ritual with a Shaman, Qin found herself as a pig in another world. Since then, she became fascinated by the unknown spiritual.

“Many of my works start with an impromptu swipe of a pencil, done in a humble, childish, humorous and even clumsy way. As my right hand has been professionally trained to paint and draw for a long time, I sometimes draw with my left hand intentionally, trying to trace back the lines and innocence of a child. I insist on gradually infiltrating such innocent quality into the complexity of human beings. I hope that the intrinsic natures of children will always exist in my achievements and works, through which we can see the world more simply, then, depict this silly story of living.”

Body, dream and humour are the constants in Qin’s work; her life in Corsica islands during the pandemic also affected her recent practice. After choosing to greatly reduce interactions with humans, animals and nature have become the substance of her dreams. Seemingly childish, Qin is a technically brilliant artist, masterful with pastels and capturing the qualities, nuances and modes of light in its softest and most luminous forms. In these works produced in Corsica, colours flow and blend even more vibrantly. Plump and gentle female figures are usually the main characters of her work – casting off from human’s social identities and relationships, these women lie on the paper in the most natural manners. Qin depicts and cuts each figure individually, then, pastes and sticks them together in unexpected and humorous ways. These little characters that are often transformed into sunsets, seas, stones, and trees have become a medium, that links us, the frail mankind to the vast universe. Probably floating on the cloud, or deep down in the vast land, Qin’s exuberant visual language entices us to imagine the shapes of winds, the feelings of trees, the endlessness of time, and the essence of all things…

When we were children, we dreamed to change the world, to travel through the sea and sky with love and wings. But growing up is always full of losses, struggles, shattering dreams and wine glasses. Like many artists, to Qin, the process of making art is the process of personal healing. Her works are personal, derived from her personal experiences of losses and adversity. She is in pain, and she has never stopped dreaming. Dreams were transformed into a kind of child-like vitality, yet stronger than what it was in childhood with the weight of life and time. In Qin’s oeuvre, I see the profound and romantic sensibilities in humanity, the loneliness and tenacity in those long years, offering, it seems, a direction through emotional distress and life’s vicissitudes.