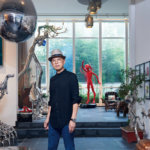 Chen Wenling’s solo exhibition at Vermilion Art is featured as a full-page story in The Australian today.  Here are some quotes from Glenda Korporaal, the author of the article.
​
“When superstar Chinese sculptor Chen Wenling first visited Australia a decade ago to exhibit a piece in the popular outdoor installation Sculpture by the Sea at Sydney’s Bondi Beach, no Chinese artist had been invited to display their work at the world-famous show.

Chen is one of China’s most renowned contemporary sculptors; his work has been bought by collectors around the world including Chinese businessman Jack Ma, founder of tech giant Alibaba, and philanthropist Judith Neilson, founder of White Rabbit Gallery in inner-Sydney Chippendale.

But it was only late last month that Chen’s first solo exhibition in Australia, titled The Lightness of Being, opened at the Vermilion Gallery in Sydney’s Dawes Point.”

“New York-based international art market website Artnet describes the contemporary Chinese neo-realist artist as examining through “a variety of surreal, often grotesque sculptures … the rapid rise of consumerism in modern-day China and the fraught relationship with its more austere communist past”.

Chen, it says, uses his “emaciated young boys, pig-like humanoids, and obese demons” to “create his biting social satire”.
He has achieved fame with his Red Memory series, comprising distinctive lanky naked figures made of solid bronze and covered in bright fire-engine red automotive enamel paint, allowing them to be used outdoors as well as inside.”