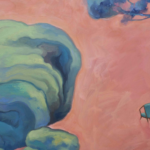 By experimenting with a shifting perspective, Dapeng’s paintings and sketches draw viewers into the world of the work, depicting multiple points of focus, perspectives and horizons; surveying every aspect of the landscape.

Vermilion Art speaks to Sydney based artist Dapeng Liu, whose work delves into the artist’s relationship to the nature and environment that envelopes him. Dapeng Liu’s illusive landscape paintings explore the fusion of the East and the West, the old and the new, and the cyclical nature of time and space. The past bleeds into the present and the present informs the future as the artist portrays grandiose mountain scapes from the Song period juxtaposed against the spectacular Australian coastline. The artist’s solo exhibition at Vermilion Art, titled Shan Shui Australis showcases a mixture of Dapeng’s recent landscape series as well as some of his nude paintings.

The term Shan Shui refers to the traditional Chinese painting style of using a brush and ink to represent landscapes or scenery from nature, rather than employing typical forms of paint. Dapeng Liu’s artworks are also preoccupied with time and the notion of time as linear or ‘fixed’, but rather as a moment or duration constantly in flux. The past, present and future intertwine and mesh together.

By paying homage to his Chinese heritage, whilst simultaneously exploring his relationship to Australia, Dapeng cultivates his own unique style by fusing elements of classical Chinese art and European art. The artist is significantly influenced by the environment that surrounds him. Thus, he explained, that the fusion of Eastern and Western landscapes and styles that are present throughout his body of work, is not necessarily a conscious decision in his painting, but rather a symptom of living in Australia for so long. Evident in the way in which he blends Sydney’s coastlines and sandstone formations with China’s magnificent mountain-scapes.

Dapeng explained that the body of work that is currently on exhibition at Vermilion Art is slightly different from previous series. He explained that his landscape works are concerned with composition and perspective as he does not limit himself to one singular perspective or focal point, but rather, he employs a traditional Chinese shifting focus point perspective.

By experimenting with a shifting perspective, Dapeng’s paintings and sketches draw viewers into the world of the work, depicting multiple points of focus, perspectives and horizons; surveying every aspect of the landscape. This technique creates a kind of illusion as the landscape appears disjointed from reality, as he plays with his own perception of reality, which, in turn manifests a surreal quality; transforming landscapes into dreamscapes. Dapeng recounted how his daily sketching practice helps him to develop ideas for artworks and landscapes, which also explains why his works are, to some extent, a collage of fragmented perspectives and memories of place.

Dapeng Liu’s nude series demonstrates the artist’s skilful brush work as his subtle and abstracted style illuminates the soft features of the body. During the interview I confessed to Dapeng that his nude paintings are somewhat reminiscent of the nudes painted by the prominent Chinese-French modernist artist Sanyu. Dapeng Liu revealed his appreciation and reverence for the modernist artist, however clarified, that his nude series evolved from the influence of an interior-designer friend’s search for black and white nude paintings. His friend had been experiencing a high demand for such artworks from clients. As a result, Dapeng began painting black and white nudes.

The artist talked about many of his failed attempts to achieve an accurate representation of the human form. He experimented with “wider” European brush types as opposed to Chinese calligraphy brushes to effectively execute the thick lines and flowing shapes required for his corporeal paintings.