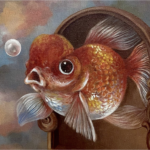 “Staying unknown is an indescribable state. It is the wonderful, and yet absurd inspiration that encourages me so that I can keep drawing.” – xinxin

I was immediately and deeply drawn to xinxin’s works the first time I saw them on the internet. Her works are mystical, magical, and intriguing. It felt like I opened the door to a brand new world when I first followed her on Instagram. I kept browsing her works of art and didn’t want to put down my phone. When I finally saw the original works, I was able to investigate the paintings’ exquisite texture and refinement. xinxin’s works seem to have a dark and mysterious power that draws me into them. It felt like I was in the centre of a vortex, and all the bizarre elements in the paintings rotated around me at an extremely high speed. I was in the crack in between the dreamland and the reality.

xinxin likes exploring the other side of the story in her paintings. Her motifs are the ludicrous world in her dream, her perception of the universe, and her insight into the unknown. For xinxin, art is a series of fantasy stories that she creates by investigating her inner self and subconsciousness. She believes in Animism, i.e., all creatures possess a spiritual essence. Her interlocutors are all creatures on earth, including the antler plaque sitting still in the room and the goldfish that blows bubbles looking like it is telling a secret. Their conversations have been recorded honestly in xinxin’s works.

xinxin’s style is very unique. Her surrealist style is influenced by Mark Ryden and Hieronymus Bosch, and she adds a grotesque taste to her creation. You can also find a strong sense of Neoclassicism in her works of art. She combines the new and the old ably. Her paintings invite beholders to a gluttonous feast, making them feel like they are in a French salon visiting an art exhibition. The more you savour them, the longer they linger in your mind.

In our conversation, xinxin told me that she was a sickly kid. She spent most of the time staying at home and reading books that her father collected when she was young. “I loved being sick because if I was sick, I was allowed to stay home and read my father’s books rather than textbooks.”, she said. The Odyssey of Homer, The Decameron, Faust, and Chariots of the Gods? were some books she read when she was young. These books enlightened her and motivated her to study more about the world. Driven by curiosity, she indulges in discovering the origin of the universe, untangling the intertwined connection between the dream and the parallel universe, and exploring which state, being alive or being dead, is the real existence. xinxin’s mind is always full of various topics, and that’s where she gets all the inspiration. When she was older, she became a person who loves freedom. She loves travelling to humanistic and artistic places, which nurtures her in her creation of art.

Her love for freedom also shows in her art. xinxin told me how she usually develops a new series. She often documents her thoughts and ideas and puts them into words in her daily life, for which she is able to get in the mood quickly once she starts drawing. When developing a new series, she first integrates the initial abstract conception into her new works. She then adjusts the specific idea of each painting intuitively according to her feelings on that day. xinxin embraces freedom, sows the seeds of creativity in her mind and lets it grow freely. This is perhaps, what I can think of, the most vivid description of how xinxin draws.

Cabinet of Curiosity is a new series xinxin started back in 2020. Carrying on her past styles and ideas, this series is inspired by allusions of varied cultures. In Cabinet of Curiosity, xinxin assembles and arranges abundant cultural symbolic elements in her paintings, which writes a story in a metaphoric way. The three paintings that xinxin creates for Dorveille also belong to this series. Interestingly, she includes several ancient oriental symbolic references and makes them encounter the western cultural symbols in the paintings, creating a more room for viewer to imagine and hopefully bring a more profound reflection.

The fanciful stories in her dreams are no longer distant, elusive, and illusory memories hidden in the bottom of xinxin’s heart. They are now manifested and reproduced on xinxin’s canvas, and her interlocutors have become the protagonists of the stories. For example, the antler is transformed into a cure for people’s hearts; the messenger of the god observes humans with its piercing eyes, judging the good and the evil; and the goldfish is trying so hard to remember what the world is like using every second of its memories.

Every work of xinxin is just like a reconstruction of her inner subconscious world and reality. Her paintings look whimsy, unattached to the real world, which seems unreasonable and unrealistic. However, the story she tells reflects the contradiction and the conflicts of the real world. She can see the unexplored side of things, and that’s why she can tell her story from a unique angle. Every work of art reveals her own subconscious thought and makes her confront her inner spiritual world so that she cannot escape from the contradiction she finds in the process of thinking. In this fast and impatient world, she is brave enough to face her true self. When I came into this gluttonous feast that xinxin prepared for us, I asked myself, how should we face our true selves?