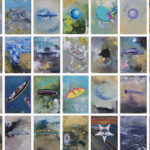 The weirdness of the subject and it’s associated events, such as abductions, altered perception, aerial light phenomena and inter-dimensional travel, to name a few, makes ufos a great subject to paint.

Ufos Per Se 2   documents different types of ufos drawing on a wealth of imagery ranging from apparently real sightings to fake sightings to science fiction and to images that have become part of popular culture. There are actually some historical sightings of strange flying objects going back centuries that can be seen in older prints, paintings and tapestries, but with the advent of photography and more recently the mobile phone the archetypal disc shaped object has became the most prevalent.

With the 50th anniversary of the moon landing getting so much attention it’s obvious that humans have the wish to travel in space and to explore the universe. As an artist I found that wondering what an alien presence might experience on earth offered an interesting new perspective and that an extra-terrestrial view of the universe could extend the concept of landscape. For this painting I collaborated with Los Angeles artist Daniel Bogunovic who has an interest in science fiction and has discovered many rare and aesthetically extraordinary images of ufos that have been incorporated into the work.
Early black and white photos of ufos originally got my attention because they were similar to the kind of conceptual and performance art photo-documentation that I was doing myself. The centre of the documentation was something enigmatic and unexplained. The mystery of what was being recorded and it’s implications connected to the supernatural as well as to the history of mysterious and unexplained events that have inspired visionaries and those interested in experiences that transcend what’s normal.

I painted the background of each panel as fast “action paintings”, using my hands instead of brushes and assembled 44 small canvases with a chromatic shift through the colours of the rainbow. On each panel, working with Daniel, we strategically placed an image of a ufo. A few of the images are not ufos but are related to ufology, such as an image of an alien or science fiction “creatures”. The work includes a wide range of ufo types, as mentioned, some are imagined but most are based on specific descriptions and actual sightings. The weirdness of the subject and it’s associated events, such as abductions, altered perception, aerial light phenomena and inter-dimensional travel, to name a few, makes ufos a great subject to paint.
​
Ufos Per Se, a similar previous version,  is in the collection of the Australian National Gallery and was included in their recent exhibition  Earth/Sky.