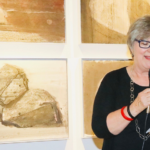 “There is a complex interwoven relationship between eastern and western art histories and philosophies, but a visual language that is entirely her own.” – Luise Guest

The title of the show, beyond referencing the landscapes of the artist’s native Shandong Province, and her coastal hometown of Yantai, suggests the measuring of time, but perhaps it also has associations of timelessness. For me this is very much the key to Gao Ping’s work – she is immersed in the physicality of her creation, referencing different aspects of Chinese tradition (most obviously in her ink works) and there is indeed a sense of both time passing and timelessness in the patient, quiet repetition and endless practice that brings refinement and depth to the work of a skilled artist. ​

Another association, of course, is the hourglass or ‘sand clock’ which measures time, and human lives. Gao Ping’s work refers both to that sense of timelessness, of being ‘in the moment’ of creation in the studio where you cease to be aware of time, but also to the slightly melancholy consciousness of the passage of time – even, in these works, of geological time, the wearing away of mountain ranges and the slow tectonic shifts of the plates of the earth. In Shandong Province, there are rocks that are billions of years old, that were once under the ocean and have marine fossils embedded within them even though they are now found in quarries far from the coast – it is also home to sites of the most significant dinosaur fossils, so the idea of aeons of time is embedded in the very landscape. Gao Ping’s ink and acrylic works in this show convey that element of layering, sedimentation and geological weathering, of wind and water turning rock to grains of sand – even when their subject is the contemporary banal such as – an electrical power board.

On that and many subsequent studio visits over the last ten years, the other thing that I have come to love about her work is that she really knows how to use grey. I happen to be a person who loves grey and grisaille painting. Its subtlety is a wonderful thing – look for example at paintings in this exhibition such as ‘Fruits’, or at ‘Flower’ or ‘Stone 2’ and see how beautifully the grey washes are balanced and modulated with other tones and almost hidden colours.

Her technique in these works is interesting and idiosyncratic – she draws quickly but then builds up layers over layers, creating a rich palimpsest of washes of ink and acrylic that are scraped back, drawn into, re-painted and scraped back again so that traces of ghostly forms beneath the surface become reminders of the artist’s physical gestures as she works in the studio. These works apply unorthodox combinations of materials. Thinned washes of acrylic are brushed over the Chinese ink underneath, and vice versa, in a process somewhat like a wax resist. The result is moody, atmospheric and subtle, with glimpses of objects or of landscapes seen through haze and mist. Gao Ping transforms the mundane – a rock, some fruit, a pile of chairs or a stack of boxes – into something mysterious and other-worldly. Sometimes subtle hints of colour underlie the dominant greys and blacks which remind us that Chinese ink is, after all, formed from soot.

Like many other contemporary Chinese artists, Gao is interested in Daoistphilosophy and in the strange (to western minds) paradox of the harmonious relationship between apparent opposites, yin and yang, light and dark, form and space. Within each of Gao Ping’s paintings, there is is a complex interwoven relationship between eastern and western art histories and philosophies, but a visual language that is entirely her own.