Each moment is the universe. Peng Yong (b.1984), a highly talented artist and a practicing Buddhist, has been recently exploring this Zen view of time. This exhibition is Peng Yong’s second solo exhibition with Vermilion Art following his successful debut in Australia in 2016. This latest series features over 20 paintings he completed in 2020 and 2021.

Peng has been reflecting on the ever-evolving relationship between ourselves and the times we live in, especially since early 2020. The effects of simple and mindful repetition can be powerful. Carrying on with the concept of ‘repetition and generation’ in his previous Urban series, Peng’s new work is made up of successive and overlaying brushstrokes and colour blocks.

​Mark Rothko said, “The people who weep before my pictures are having the same religious experience I had when I painted them.” The slow and steady brushstrokes in Peng’s work mindfully record these passing moments, for himself, and for us all. 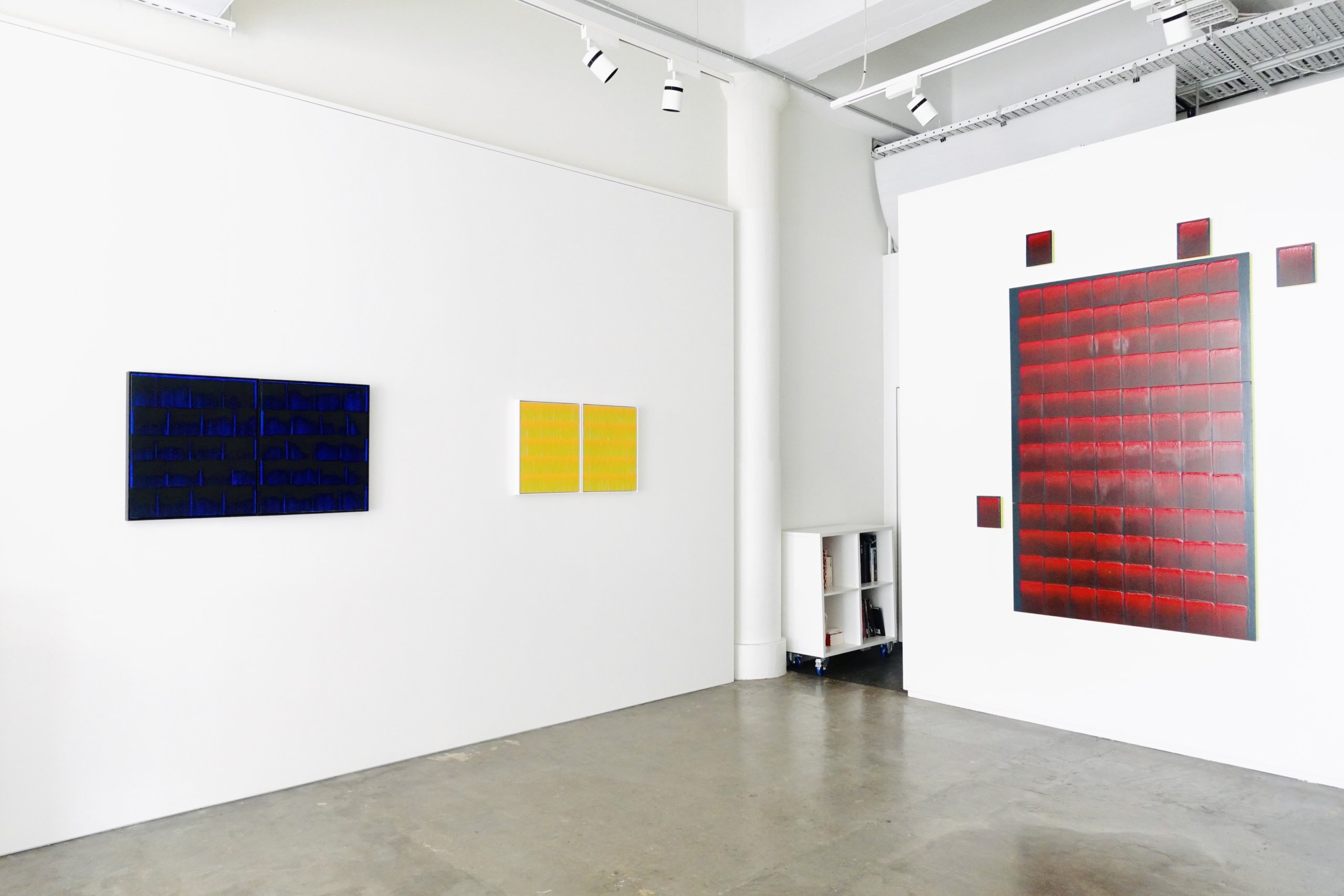 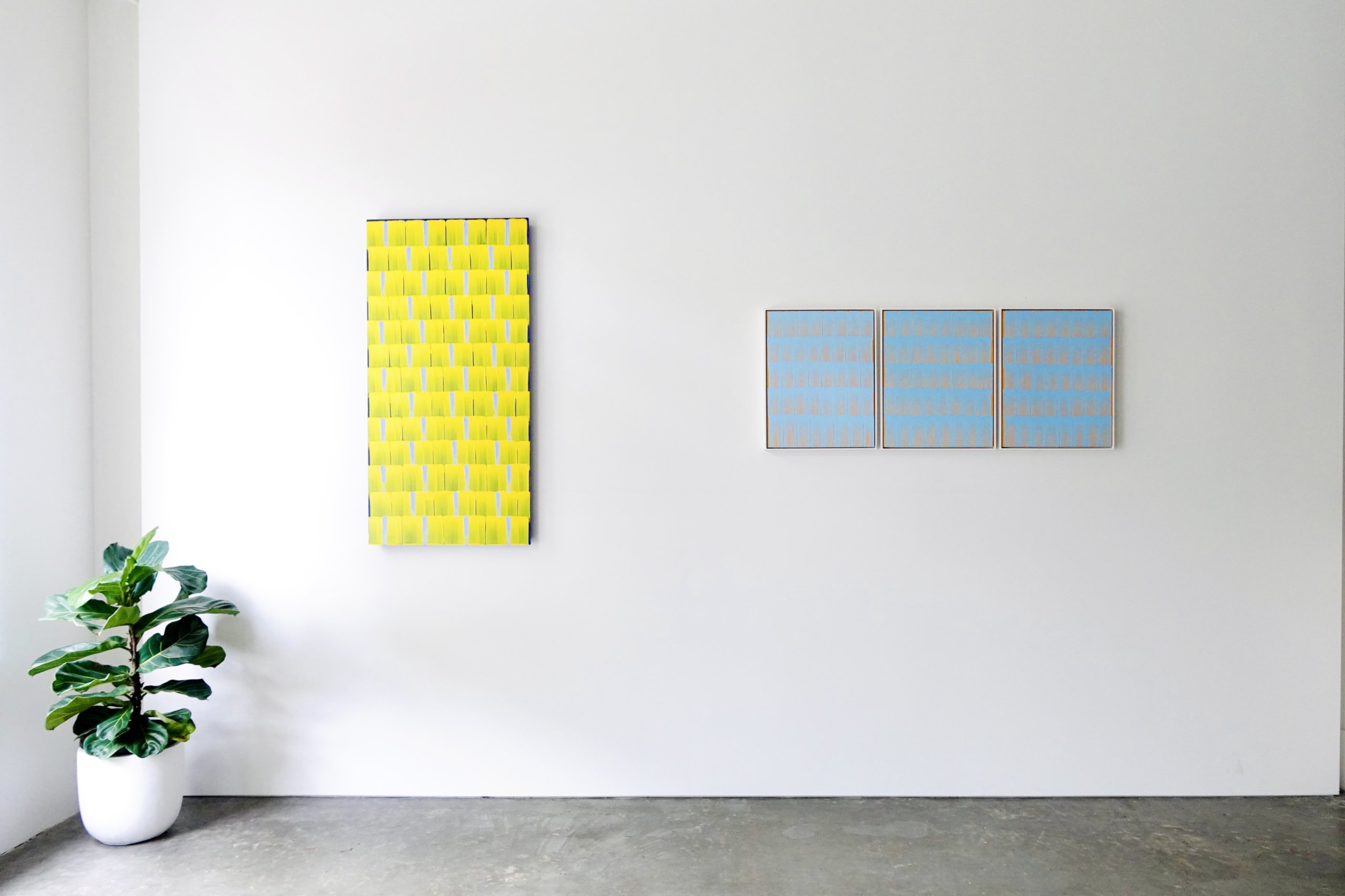 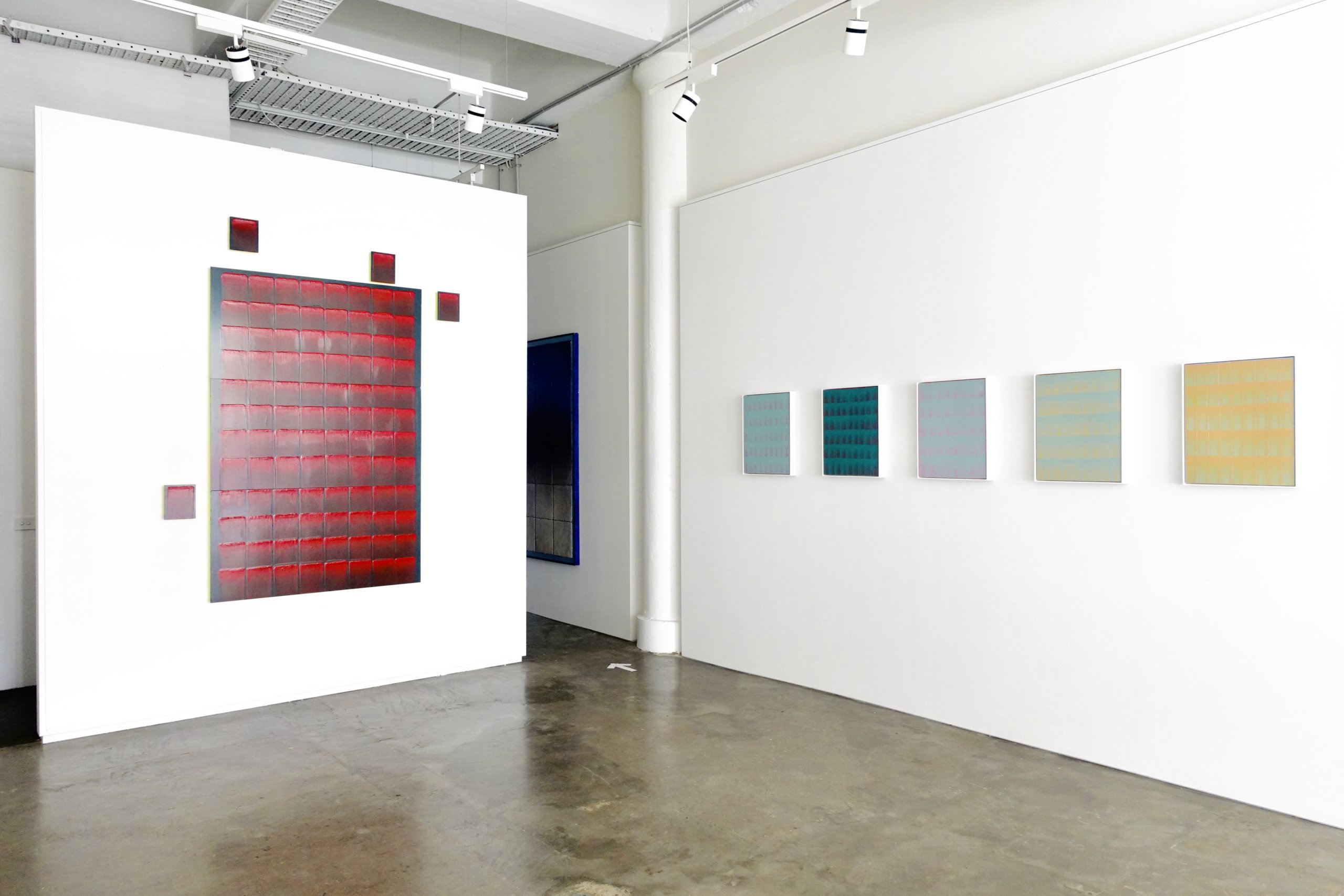 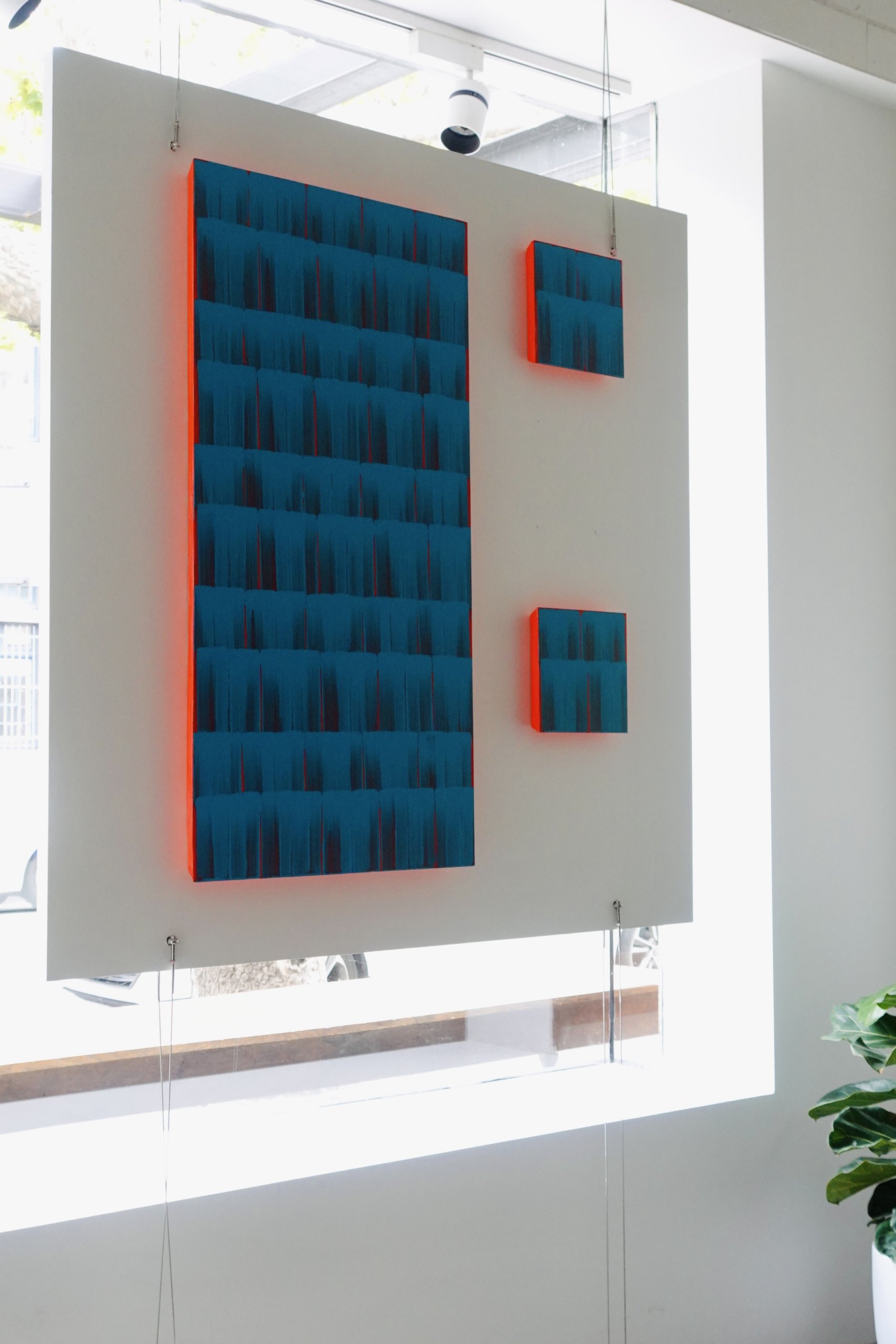 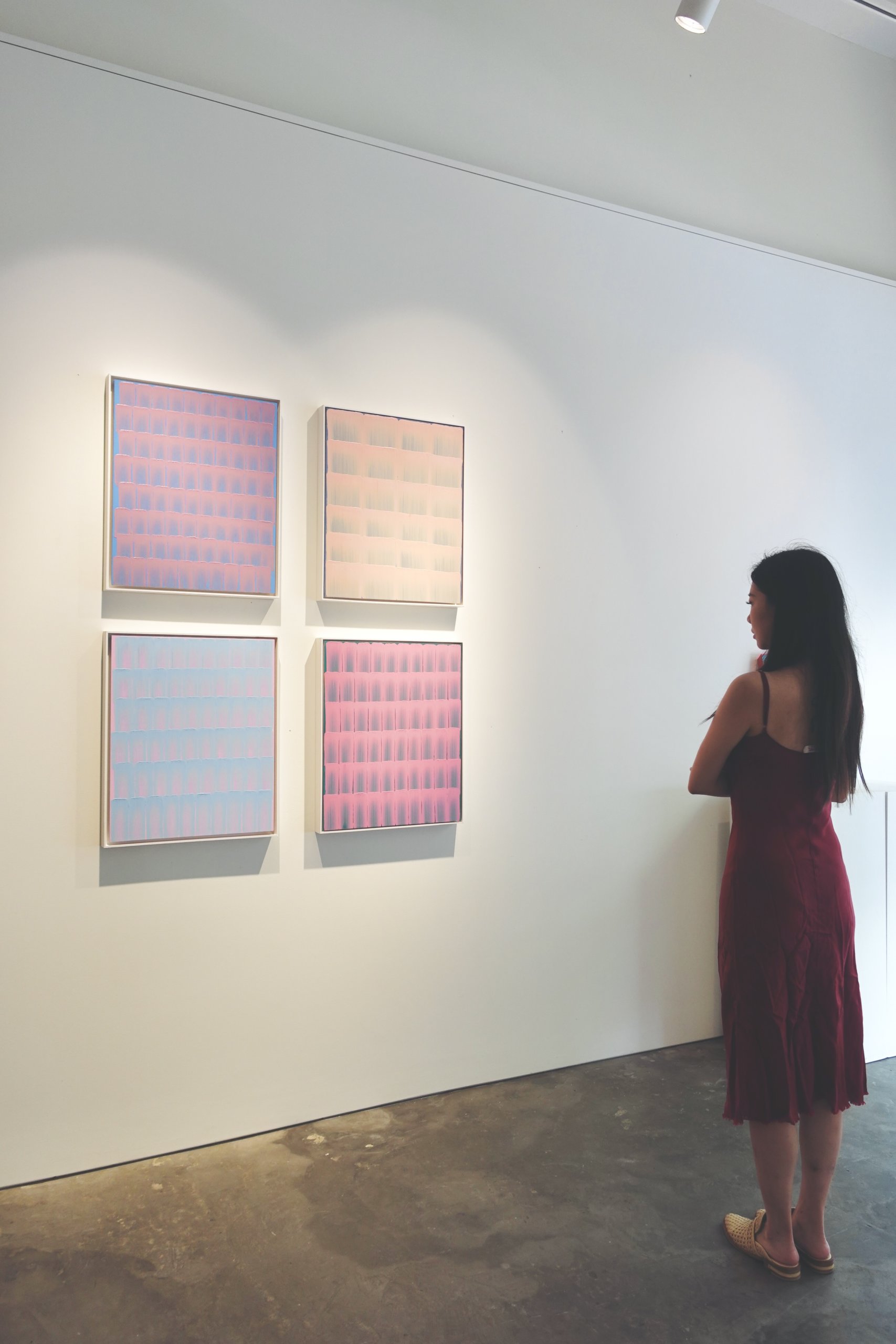 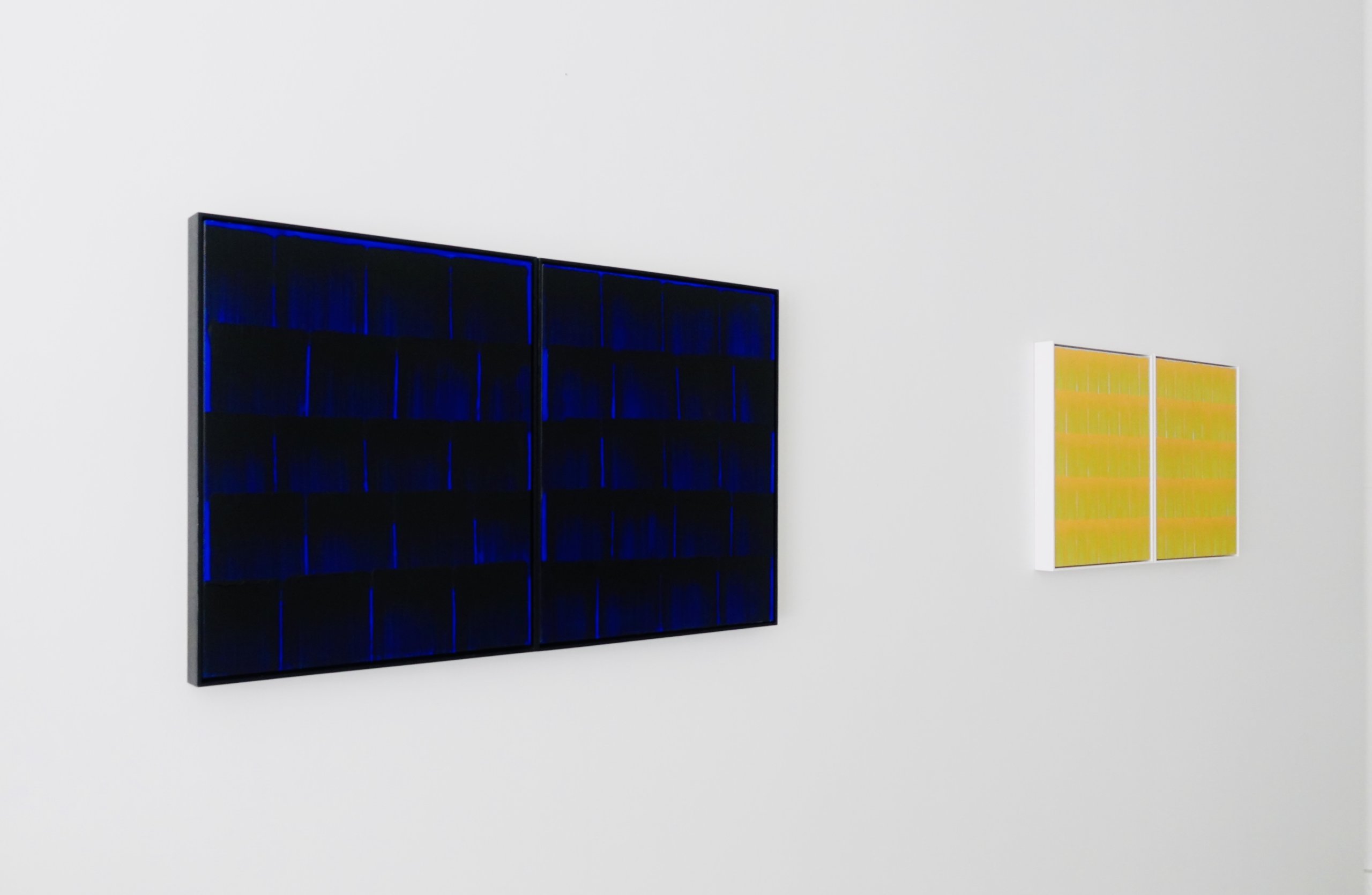 “Peng Yong’s paintings are orchestrated colour fields, with harmonies that range across the lyrical, through the spell-binding and magnetic.”

Peng Yong: Quest for the spiritual

Having graduated in printmaking at the Central Academy of Fine Arts (CAFA) in Beijing in 2014, Peng Yong (born 1984 in Shaoyang, Hunan) spent time in Paris as an artist-in-residence at the Cité Internationale des Arts, before taking up teaching at the Tianjin Academy of Fine Arts where he continues to develop his own work.

His first exhibition at Vermilion in 2016, entitled ‘Urban Imprint’, comprised etchings of subtle colouring on seductively textured paper that he had made himself. His own sumptuous paper is important to him but his move to painting has been partly to minimize the technical side of his creating and the time it required. The compositions of his etchings in the ‘Urban Imprint’ series are irregularly patterned grids that capture in nuanced and graded colours the variegated surfaces of city skyscrapers, the repetitious rhythms of supporting structures and the reflectivity of glass. The grids elevate the quotidian city ‘wallscapes’ to icons of meditative engagement, taking the viewer on delightful journeys of the aesthetically sensuous into a timeless, spatially undefined realm. In 2017 Peng Yong held a solo show of the ‘Urban Imprint’ series at the New Sino-French University Museum in Lyon, France, while his ‘City Rhythm’, 2018, at Vermilion demonstrates his continuing absorption with the patterns and tonal qualities of urban surfaces.

It was while at CAFA that he developed his interest in Buddhism which accorded with his search for the spiritual.Thus while the Tiny Dust series of etchings that he started in 2015 refers on one level to the different perspectives we accumulate at different times in different circumstances, it refers too to the Buddhist teaching that the universe is contained within every grain of dust: the macro in the micro. For example, while the upward shading from hazy grey to a luminous deep blue of the 24 panel work Tiny Dust No.9 captures the fresh perspective of the sky Peng Yong got when viewing from a plane window the low, dusty haze over a city, it is also a metaphor for the transition from samsara to nirvana. A Buddhist teaching related to ‘tiny dust’ recounts that the Buddha, after achieving Enlightenment under the Bodhi tree, reflected that what he had realised was too profound for others to understand and that he should perhaps pass into final nirvana without teaching. But the god Brahma persuaded him to teach, arguing that while some of his audience would have limited capacities, there were some ‘with little dust in their eyes’ who would be able to understand his teaching and so be set on the path to enlightenment.

The mesmerising colour-fields of Peng Yong’s prints are further developed in his acrylic on board paintings in the series 3000 realms in a single moment of life which he started in 2020 with the outbreak of the Covid-19 pandemic and has continued into 2021. With these images he was seeking calm and an inner tranquillity to counter the confused stress and tension brought about with the implementation of Covid-19 restrictions. Through the series title 3000 realms in a single moment of life  we infer the wisdom of the Lotus Sutra, the most influential sutra in East Asia that teaches crucially that Buddhahood is inherent in each one of us: all persons can become buddhas.

The meaning of the phrase 3000 realms in a single moment of life is that at each moment the smallest phenomenon (‘a single moment’) and the entire cosmos (‘three thousand realms’) mutually pervade and encompass one another. Through its texts and cosmology Buddhism reveals extraordinary concepts and worlds that defy the rational and help us intuit the profound.

Even within the series, changes across the works reflect the artist’s journey through Covid-19 times. The paintings have an assured meditative quality, and a luminosity that can be subtle and understated or vibrantly declamatory. The paintings (acrylic on board) comprise rows of tactile, vertical brushstrokes that would have required great discipline and concentration to realise – a discipline borne of practice and a concentration where the self is forgotten, and the mind takes over, creating something new borne from the unknown that is beyond words or teachers.

Peng Yong’s quest is spiritual – to find that serenity accessed by those who have intuited the ultimate reality, the transcendent, the void, beyond all phenomena. Peng draws on his Buddhism but empathises/identifies with the practice of certain transglobal artists, Western and non-Western, who also seek beyond the known. He identifies with the work of Yves Klein and his search for the infinite void; and pays tribute to him in including the intense ultramarine that Klein copyrighted as International Klein Blue in his own suite of colours. Anish Kapoor’s known interest in spiritual engagement with the viewer, the void, empty space, bright colours and his wish to lose his sense of self, resonate with Peng’s interests. (Peng saw Anish Kapoor’s 2011 show at the Grand Palais in Paris, and later in a show at the CAFA Gallery in Beijing in 2019). Another artist whose work aligns with his own interests is Wolfgang Laib, particularly in his exploitation of the texture and shades of potent colours that resonate viscerally.

Peng Yong’s paintings are orchestrated colour fields, with harmonies that range across the lyrical, through the spell-binding and magnetic. His technique is first to cover a board completely with a ground colour and then apply his brushstrokes rhythmically in a seemingly randomly chosen different colour, with the background colour allowed to show through around the edges of the composition and between the brushstrokes. It is the disciplined, repetitive process of painting – the marks on paper that is the leitmotif of all classical Chinese painting – that is the threshold of serenity and spiritual realisation.

His paintings in this series vary in size: one of the largest is a work from the beginning of the Covid-19 lockdown in early 2020 which is concerned with freedom. It comprises a vertical rectangle surrounded by four smaller works randomly positioned around the main one. Through the discipline of the repetitive process, Peng Yong aspires to break free of constraints – the physical ones imposed by Covid-19 restrictions, and the mental ones that inhibit and restrain our thinking. Each one of this set of five paintings is on a thick board with receding edges that are painted a glowing orange. The effect is the impression that the paintings are floating freely in space while glowing with their own aura that energises the surrounding space. The set is like a cosmic mandala that draws the viewer into unexplored realms. Although the idea of a coloured border started with the print works, the adaptation of this idea to the receding deep edges of the paintings is a technical innovation that contributes to the iconic presence of the works.  The complete series comprises larger, vibrantly coloured images floating free from the wall alongside ones with more subdued palettes and thin close-fitting frames.

Numbers are significant in Buddhism where there are many lists that attempt to bring order to this incredibly complex system. For example, there is a list of the names of the thousand buddhas: a repetitive chant (mantra) paying homage to each buddha is an important meditative ritual. Peng Yong’s brushstrokes are like a visual chant. Each repetitive, overlaying brushstroke is a visual mantra on the path to enlightenment. Deliberately and focused, he makes them – each a considered mark mindfully honouring each moment. Similarly the viewer too will conquer the ego, forget the self. Each painting offers the viewer the opportunity for mindfulness meditation.

‘3,000 realms’ touches on many aspects of Buddhist teaching that are too complex to enumerate here.  Even three itself is a significant number in Buddhism: It refers, for example, to the three realms of existence: the realm of desire; the realm of form and the realm of formlessness, the supreme reality to which we all aspire.

The thousand in the phrase ‘3,000 realms’ comprises multiples of the ten-level ‘dharma-realm’ that is reality: six levels, including hell and hungry ghosts, belong to this living world of samsara; three above refer to disciples; and ultimately there is the single realm of the buddhas. 1,000s of these dharma-realms, each intersecting with each other, are contained in a single thought, and in each one of Peng Yong’s brushstrokes.

The writer is grateful to Man Luo who was the translator for conversations with the artist. 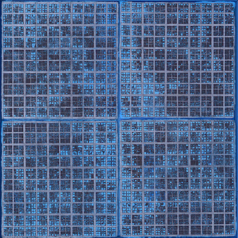 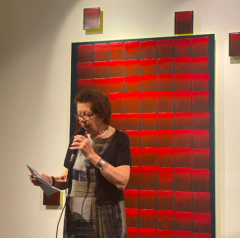 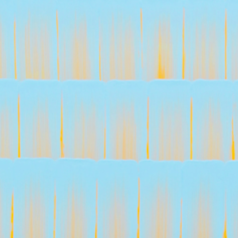 PENG YONG: Quest For The Spiritual by Jackie Menzies