the faces of guanxiu's sixteen friends, the luohans of his feverish dreams

Guanxiu drank some bad wine one night. The wine had been left out in the sun for several days and had turned a sour brown and solidified into a thick murky vinegar. He fell into a deep feverish dream shortly after. In his dream he was sitting on a smooth flat stone in a pleasant clearing with a little pond. He was desperately thirsty. A luohan appeared with a vessel in hand, dipped it into the pond and offered it to him. He greedily drunk the cool liquid down, but it only made him more thirsty. One by one the other 16 luohans came through, each with a different vessel, each offering him a drink, each sip making him even more mad with thirst. After they had all passed through Guanxiu awoke, fumbled around, found the wine bottle, had another drink and fell back asleep. 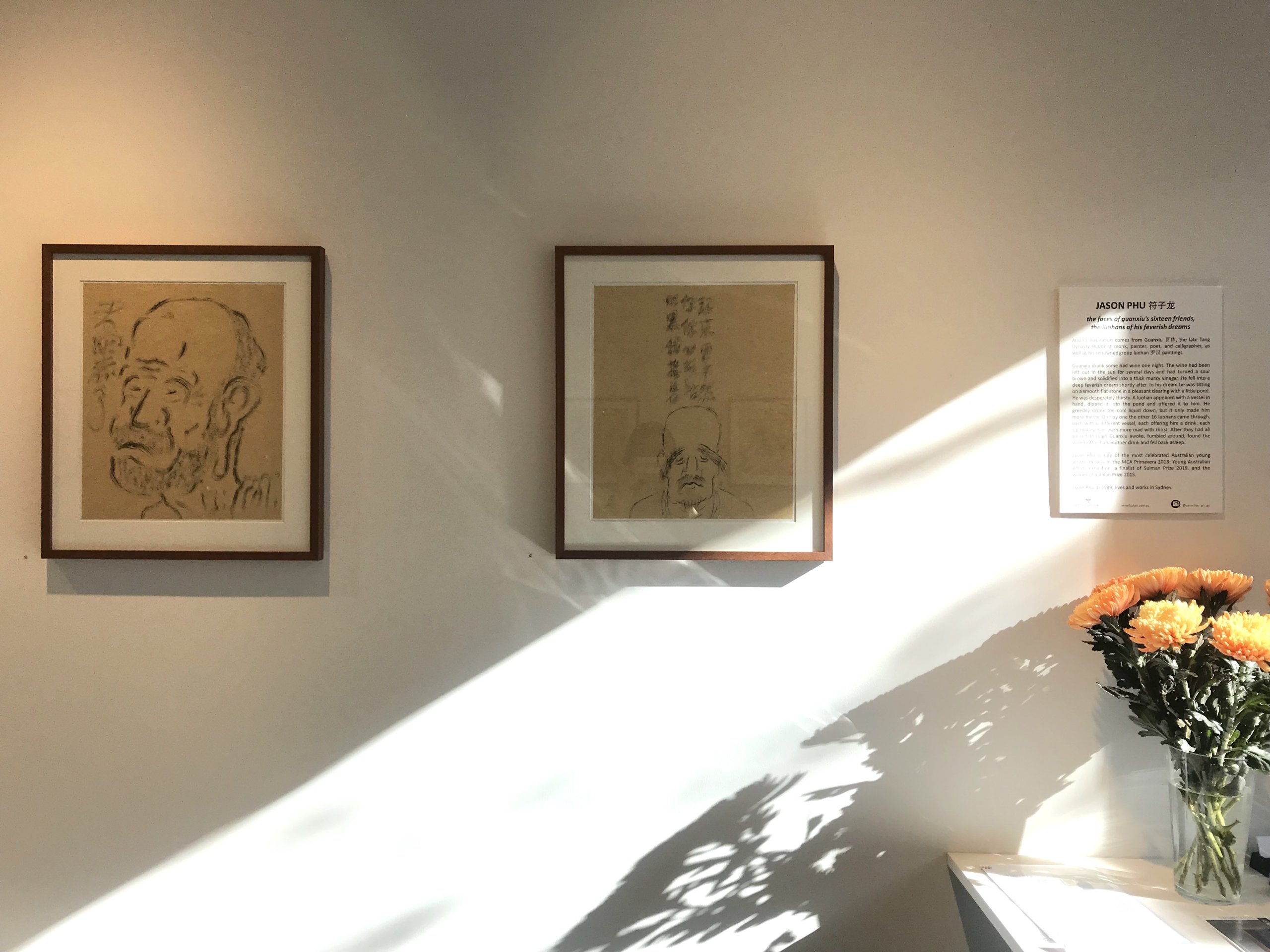 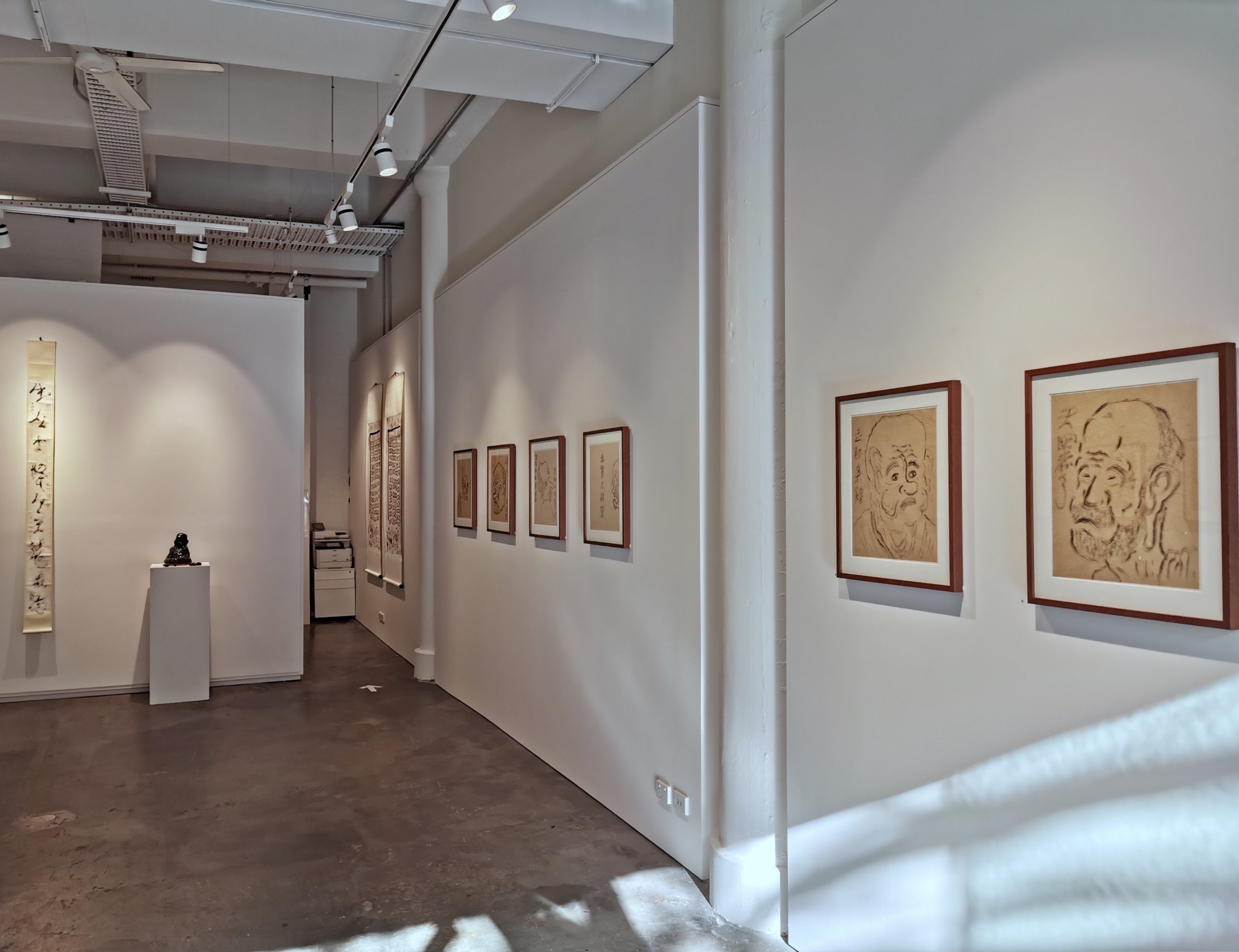 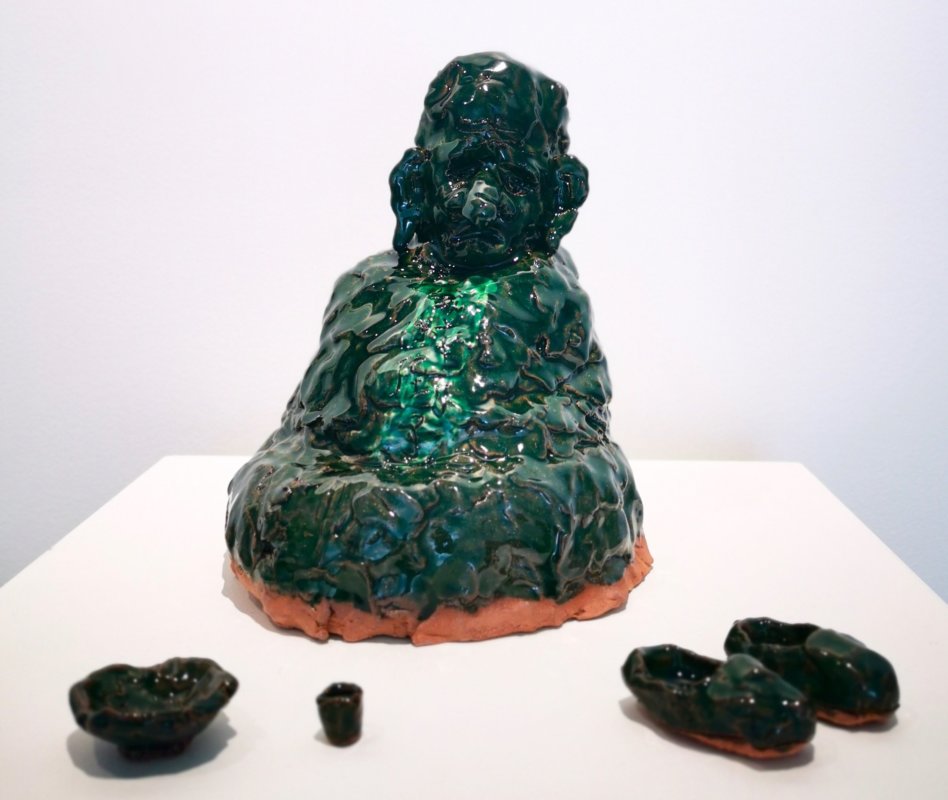 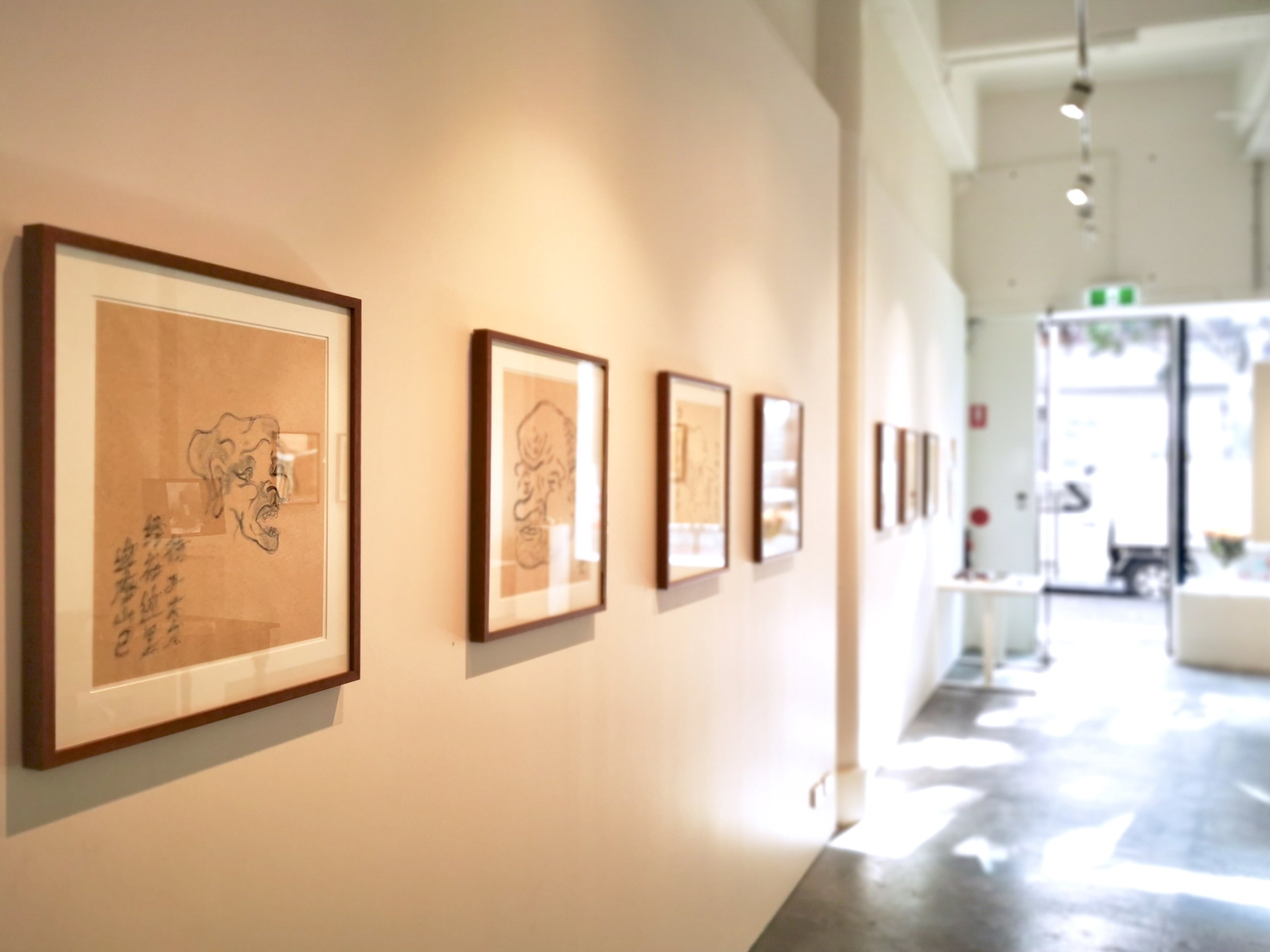 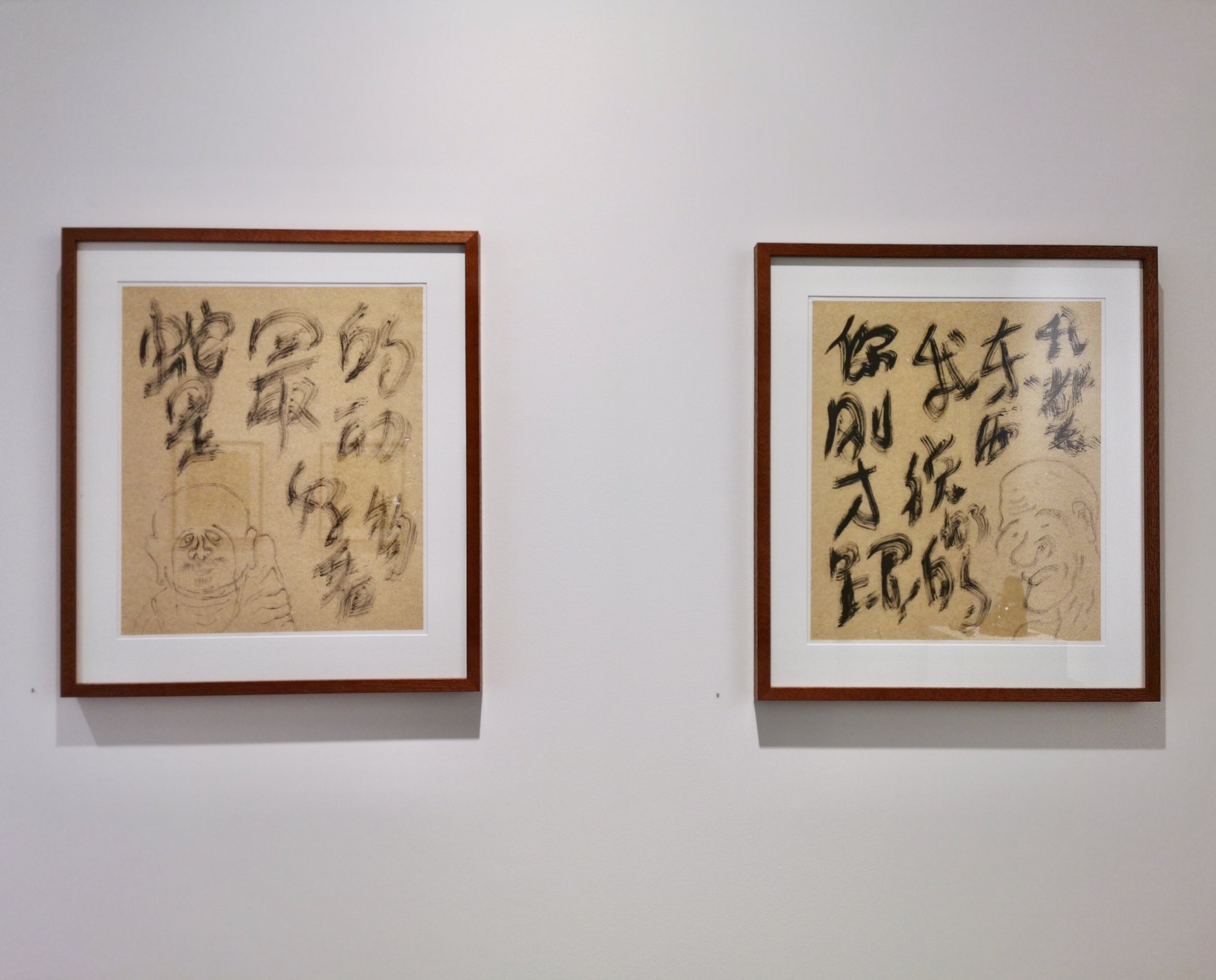 “All you need is a little imagination, an open mind and as Jason once told me, ‘the rest is history’. ”

the faces of guanxiu’s sixteen friends, the luohans of his feverish dreams

I’m a great believer that art — and in many ways — life should never come with a handle with care sticker. And if I were to think of any artist who embodies this mantra, through their irreverence and passion to disrupt traditional thinking and convention, it would be Jason Phu.

In private circles, I’ve described Jason’s paintings as from the school of drunken Chinese calligraphy. Although in a more formal setting (perhaps one like this opening tonight), I would describe his work as from the “new ink” genre –– a contemporary reimagining of classical Chinese Shui-mo (ink and brush) painting.

For those who don’t know Jason’s work well, his paintings invite you to experience a realm shrink-wrapped with the smell of nostalgia –– a place that distils histories and subjects drawn from classical Chinese art forms, intermingled with his own personal Chinese-Vietnamese-Australian upbringing.

By way of example, I can think of painted scenes of him shopping with his mum for strange Buddhas at Bunnings or being reincarnated as a refrigerated bowl of fried rice. Truly, Jason Phu is one of those rare artists who takes great pleasure, and pride, in admiring the strange situations in which we sometimes find ourselves. And this explains why Jason’s work linger in the imagination, engaging with our curiosity above all else.

In this new suite of works, Jason has painted 16 arhats or Luohans, disciples of Gautama Buddha (c. 563/480 – c. 483/400 BCE) who followed the Noble Eightfold Path to attain the four stages of enlightenment. One of the earliest depictions of the Luohans were painted by the Chinese monk Guanxiu (832AD – 912AD) in 891AD. Legend has it the Luohans appeared in Guanxiu’s dreams, pleading him to paint their likeness. The result were 16 portraits of these disciples painted as foreigners with bushy eyebrows, large eyes, hanging cheeks and high noses. As they had not been given pictorial form prior to this painting, they have lived on in history, recreated over and over again stylistically in this way.

And nearly 1200 years later, the Luohans appear again before us. In Jason’s version, these men are painted slightly stretched, a little jiggled and comically exaggerated. But they have not aged a day. And unlike traditional Daoist or Buddhist life principles that tend to accompany traditional literati interpretations of the Luohans, Jason has branded them with his unique, well, what I like to call, ‘phu-isms’.

“The snake is the most beautiful animal,” one of the Luohans ponders;

“I kicked a big stone and my toe hurts,” pleads another;

“apart from my head, there is nothing else.” Another says.

And when we first confront these statements, there is a tendency to mislabel them as prosaic platitudes, but sit with them, and you’ll find that they are aphorisms in the very sense — pithy, terse, insightful and most importantly, so very memorable. And this, I think sums up a large part of Jason’s practice. His humour and lightness of touch serve to underscore a more serious intent.

And for me, that’s the reminder that sometimes it’s the little strange things in life which give it meaning. From the strange buddha at Bunnings, to the bowls of rice that sit for weeks in our fridges, or the strange cast of characters each jostling for airtime around us tonight. All you need is a little imagination, an open mind and as Jason once told me, ‘the rest is history’. 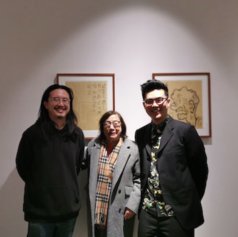 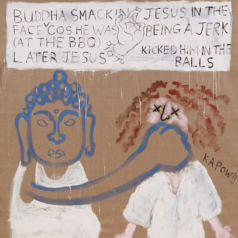 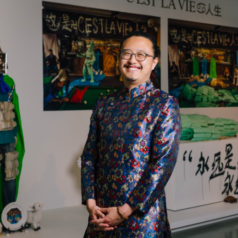 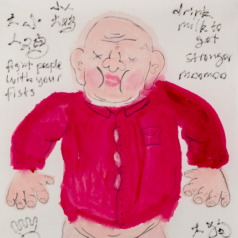 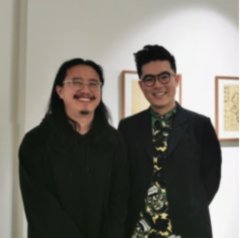 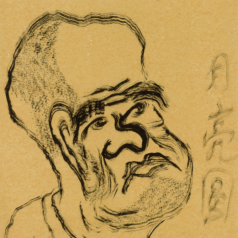 Jason and Guangxiu's sixteen friends - a talk with Jason Phu